Funke Akindele and her husband, JJC Skillz have taken to their social media page to react after Nigerians bashed them for holding a party in the midst of a lock down.

In a live video, JJC strolled round the estate explaining that all those who attended the party have been in Amen Estate with them. He also added that Eniola Badmus quarantined in the estate and after 14 days, showed no symptoms.

“Eniola Badmus quarantined in one of the houses her and after 14 days, she showed no symptoms” he said.

He also showed Naira Marley’s house and Basket Mouth’s house as proof that nobody from outside the estate attended the party.

It's your data, go ahead and rant – Funke Akindele husband replies y'all bashing him. Says Naira Marley, Eniola Badmus and others have been in the estate with them pic.twitter.com/kWGTh39Lit

Funke, on her part, wrote;

Thanks for the love guys!!!!

We all have been together for over two weeks, we are safe and take all precautions.

Don’t create unnecessary sensation. Omoghettothesaga was to be filmed before the lockdown and some of us had been camped in Amen Estate. 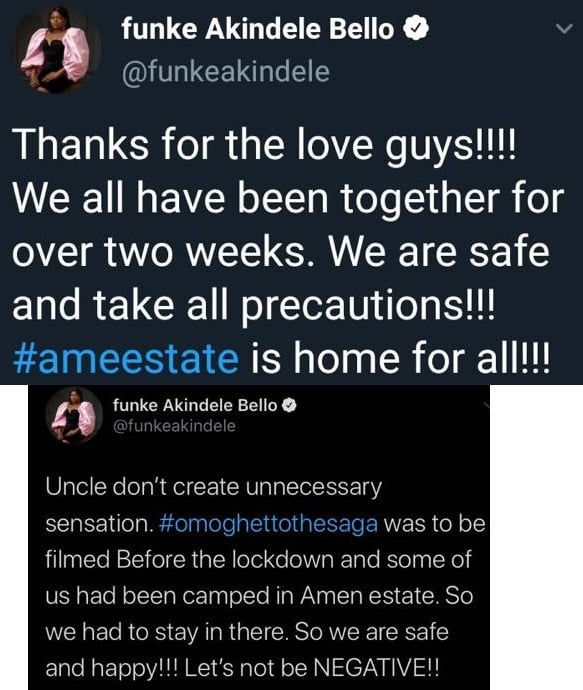 “Hushpuppi Is Our Citizen” – St. Kitts and Nevis Government